Here are two more sneak peeks from the 2022 Keepsake Ornament line featuring the 6th in the Cozy Critters series by Nina Aubé and 14th in the Season’s Treatings series by Sharon Visker.

Season’s Treatings
14th in the series. 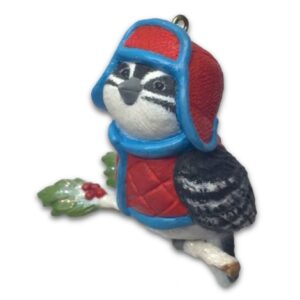 Cozy Critters
6th in the series.

Here is a sneak peek of Storytime Snuggles, 15th in the Making Memories series by Tammy Haddix.

Here are two more sneak peeks from the 2022 Keepsake Ornament line featuring the 3rd in the Sweet Decade series by Tammy Haddix and 24th in the Mischievous Kittens series by Nina Aubé. 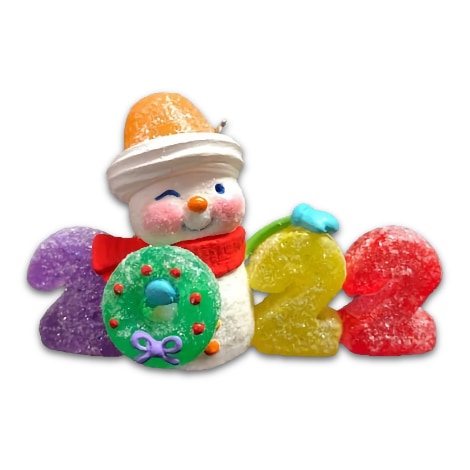 Sweet Decade
3rd in the series. 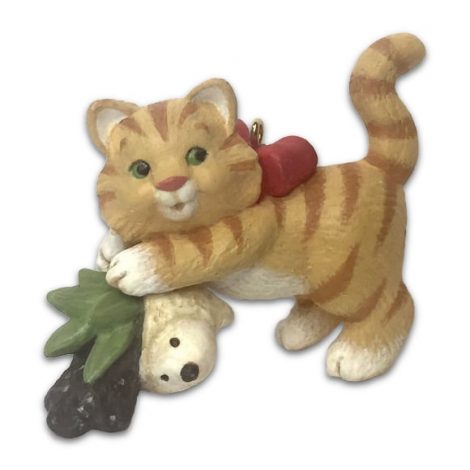 Mischievous Kittens
24th in the series.

Hallmark sat down (virtually!) with Anita to discuss her adorable Boston Terrier, the 31st ornament in her Puppy Love series. Enjoy! 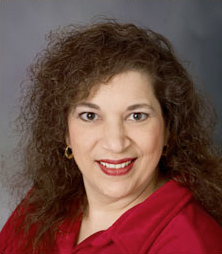 What inspired you to craft your Puppy Love #31?

Anita: “I was inspired to do a Boston Terrier by the many requests I have gotten over the years from fans of the series. Boston Terriers have always been a popular breed, so their time had finally come.” Turns out, all of YOU had an impact on Anita’s inspiration for the 31st in the Puppy Love series!

Anita: “The particular puppy that inspired this ornament is named ‘Darwin’ who is the granddoggie to a good friend of mine. Since then, I have become aware of another pup named ‘Combat!’ who looks just like this and belongs to another good friend of mine.” It’s always so fun hearing the personal connections Anita has with her Puppy Love designs!

What materials did you use to bring it to life?

Anita: “I designed my original sculpt in wax and added the usual red ribbon and brass tag with the year date. I also added flocking to the stocking (haha, that rhymes!) to give it a softer look and feel.”

Anita also added, “some Boston Terriers have a dot in the middle of the white blaze on their foreheads called a Haggerty spot, although some people call it an Angel Kiss, so I gave this pup the angel kiss for good measure.  ” How cute!

We can’t wait for you to see Anita’s adorable Boston Terrier ornament when it releases at Ornament Premiere in July!

When the Keepsake Studio brainstorms new ideas for ornaments, the same thought is always shared: “How great would it be to tell the story between two characters?” From this thinking, the studio creates limited-quantity companion ornaments.

Father Christmas
18th in the series.

Father Christmas’s Reindeer – Welcome the wonder of the season with this regal reindeer which carries an ornate starfish-themed fabric saddle blanket that’s trimmed with white faux fur and adorned with ribbon and glitter accents.

Cookie Cutter Christmas, 10th Anniversary – Join the beloved little mouse wearing a party hat–in celebrating 10 years of holiday fun with the Cookie Cutter Christmas series–as he and his friend put the finishing touches on the grand cake, complete with a glittery milestone topper, that sits before them. 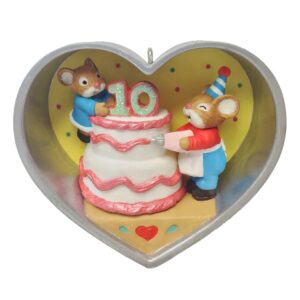 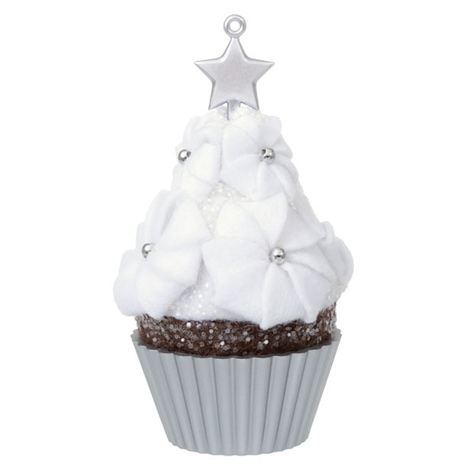 Evening Grosbeak
The Beauty of Birds
17th in the series. 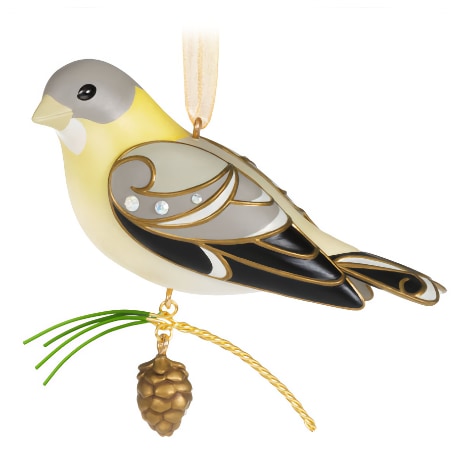 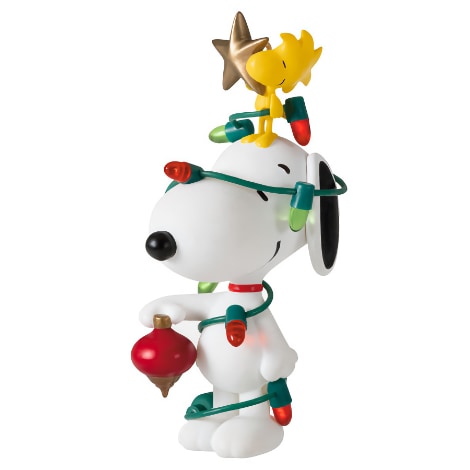 All Decked Out
Spotlight on Snoopy
24th in the series.

All Tangled Up
The PEANUTS® Gang

All Tangled Up – Charlie Brown has a hard time finding anything about the holidays easy. Relate with him as he struggles to untangle Christmas lights. 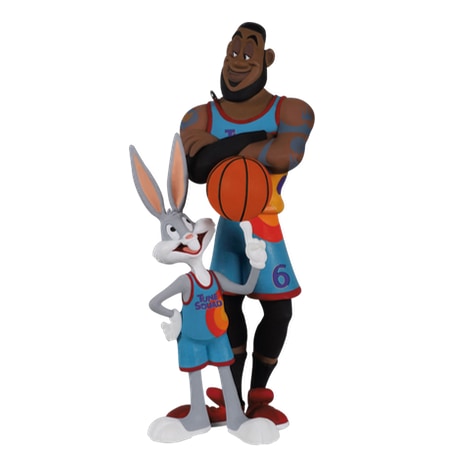 Marvin the Martian – Be part of the epic adventure as the once extraterrestrial referee joins the Tune Squad to take on the Goons.

Sonic and Tails
Sonic the Hedgehog™ 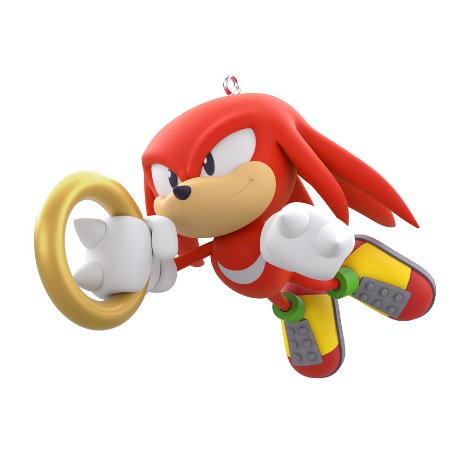 Knuckles – Join Sonic the Hedgehog’s red echidna friend as he grasps a power-boosting gold ring with one spiked hand while the other reaches out, ready to protect the Master Emerald.

The 2021 Dream Box includes a little booklet entitled “Behind the Designs.” The booklet tells the stories behind nine Keepsake Ornaments and reveals five 2022 Sneak Peeks. 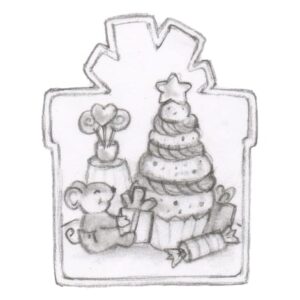 “All of the critters in this stocking are pets I’ve personally known and loved. The bird is my beloved cockatiel Opie, who lived to the ripe old age of 25. The hamster is Wiley, a friendly little hammie I had in college. The dog was inspired by my sister’s feisty schnauzer, Russell. The kitten has the same sweet face as my niece’s cat, Nala. And as a child, I had a bunny named Thumper that looked just like the bunny in the stocking!”

Nina Aubé’s family didn’t have a fireplace mantel when she was growing up but that didn’t stop them from hanging Christmas stockings. They simply improvised and hung them on their buffet drawer handles! So, creating this first in the Stocking Stuffers series brought back great memories for Nina.

“Upon awakening at the crack of dawn, it was tradition for my two sisters and me to make a beeline for our stockings. We’d immediately start gobbling up the candy inside. There was always a small gift in each stocking, in my case usually a small animal figurine or doll. I adored tiny toys and objects and still do, so perhaps that inspired me to put cute little animals in this ornament. Plus, I love animals, of course!”

Nina hopes the personal connections that inspired her design of this ornament will bring you fond memories of your own traditions that you’ll share those memories with loved ones.

Stocking Stuffers
2nd in the series.

You can look forward to a different Keepsake artist creating a new Stocking Stuffers ornament for this series every year, adding to the meaning and memories behind each design. Anita Marra Rogers will bring you the second in the series in 2022.

“Stocking Stuffers.” Behind the Designs. 4-5

Duke of Winter
Noble Nutcrackers
3rd in the series

Terri Steiger has always loved snow. Growing up in Cleveland, she remembers sitting by the window outside the bedroom just waiting for the snow to begin.

“I would get so excited to see the first flakes! I looked forward to walking to school in the snow and remember my red mittens having frozen clumps of snow on them and my fingers being numb from the cold. But that didn’t stop my siblings and me from playing in the snow for hours. I would catch snowflakes and wish they would never melt because they were so pretty.”

That love of snow was the perfect inspiration for the third in her Noble Nutcrackers series, the Duke of Winter. Terry says, “I wanted to portray him as king of all things icy, frosty and snowy, as my homage to my favorite part of the season.”

She also became intrigued by nutcrackers when she visited a German gift shop while in college. “I would go in there and look at all the nutcrackers, and I was fascinated by them. I bought one, which was a stretch on my art students budget, but I was drawn to the design and quality of the wooden guy.”

For Terry, this design is all about wonder.

“I hope you’ll like the icy, glittery feel of the nutcracker. I wanted the dense glitter around the shoulders to look like snow falling and the design to give a nod to the beauty and intricacy of each snowflake. My hope is that his crowd will capture that moment in time for you when a single snowflake can evoke a sense of amazement.”

It’s a feeling that Terry still anticipates each winter as she waits for the first magical snowflakes to fall. 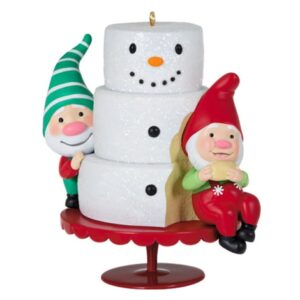 Gnome for Christmas
1st in the Series.

“My initial inspiration was to come up with my own unique brand of good storytelling with a little humor sprinkled in. These two characters celebrate Christmas in different but complementary ways. And although all their future festive misadventures, at the end of the day they’ll always know how to sit back, relax and have a good laugh just like all the best, odd couples.”

Gregor also credits members of the Keepsake Ornament Club for inspiring him. “I had my first opportunity to meet the amazing Keepsake fans at the 2019 KOC Convention. Chatting with them and seeing their passion for ornaments influenced me greatly!”

Gnome for Christmas
2nd in the series.

Here’s a little sneak peek at Gregor’s second ornament in the series, available in 2022.

“It’s my love letter to the fans and club members that I met at the Keepsake event. And keep a look out because coming up with new ideas for this series will be mostly inspired by you in years to come!”

Holiday Parade
3rd in the series.

Tammy Haddix loves to put as much storytelling as she can into her ornaments, and her Holiday Parade series is a great example of how she brings those stories to life. Each vehicle in the parade tells a mini-story about a fellow Keepsake artist!

The third ornament in the series joins the parade this year, featuring Robert’s snow removal truck. “This design is inspired by Robert Hurlburt and the fact that he lives in the country, over an hour away from Hallmark headquarters. Several times he has gotten trapped and was unable to make it into work because of flooding or snowstorms. I thought Robert definitely needed his own snow plow, so he can clear his own path!”

As she began this series, Tammy found inspiration in the quaint, small-town feel of North Kansas City. “My husband and I love taking our boys to the Snake Saturday Parade in North Kansas City. I also love how the town decorates for Christmas, so I thought a parade in a cute little Christmas Town would be a fun idea, using trucks as a way to tie it all together.

Tammy hopes having a glimpse into the stories of each artist she features will be a fun way of getting to know them all.

Holiday Parade
4th in the series.

Here’s a sneak peek of the next ornament in the parade, inspired by Kristina Gaughran!

“The Christmas tree is a fairy house, and there are lots of little touches to tell Kristina’s story that you’ll hear later!”