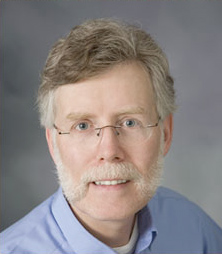 Most of us doodled in our notebooks during high school, but Ken Crow’s drawings were a real learning experience. In his 11th grade history class, he discovered that his pictures were worth a thousand words. History teacher, Mr. Ciriello, began letting Ken use creative illustration instead of taking class notes.

During a Civil War lesson, Ken drew battle scenes. When Ciriello explained how an economy works, Ken sketched his teacher running a treadmill turning the cogs of an economic engine.

Ken calls Mr. Ciriello’s encouragement the “green light” for his ability to express his artistic sensibility. Ken always understood the power of communicating ideas through art, and he became an editorial cartoonist for a newspaper. Now he conveys a sense of history and emotion in the expressive and complex work he does with Keepsake Ornaments.

But how did Ken go from drawing to becoming an expert in mechanical Christmas ornaments? As a child, he tore apart every toy he ever had to see how it worked. He even made other toys out of the spare parts. For Ken, Keepsake Ornaments will forever keep him connected with that inquisitive kid inside.

Ken Crow has loved trains and Mickey Mouse for as long as he can remember. He grew up in Long Beach, California, not far from Disneyland, and he recalls riding the train that circles the park. Today he surrounds his work space with Mickey Mouse phones and other classic Disney memorabilia, so it seemed inevitable that trains and Mickey would come together as one of his ornaments.

“I just love trains, and I started thinking: what’s something fun we could do with Mickey this time?” Ken said. “Let’s put him in a train engine! So I tried to hark back to the one at Disneyland.”

He teamed up with longtime collaborator Ron Carlson, an engineer, to come up with a Magic design. First task: make it move!

“I love mechanical things and the train engine is almost like a character,” Ken said. “It’s animated. It wants to go somewhere and do things.”

Using Ken’s concept, Ron began figuring out ways of connecting the wheels with pushrods, then sending that motion up through the throttle, Mickey’s arm, the smokestack and the bell. But it’s not only those components that make the train look like it’s in motion. “I didn’t just sculpt it in right angles; everything kind of bends,” Ken says. “I tried very hard to make it look animated even when it isn’t. That quality is very Disney-like.”

Each project presents interesting new challenges. But Ken’s philosophy remains the same, “What is the greatest number of neat things you can use that would excite someone? So don’t just make the smoke for the smokestack; make it go up and down and look like it’s puffing.”

Ken designed a hidden Mickey on the bottom of the train, using extra holes from the speaker component.
Mickey is voiced by Bret Iwan, who used to be an illustrator at Hallmark.

Ken’s dad always reminded him of Santa Claus. A kind encourager, Robert Crow was the first person to go to the card shop when one of Ken’s ornaments debuted, asking in amazement, “Ken, how do you do that?” Robert passed away five years ago, and Ken always wishes he could show him each year’s new designs.

Jingle All the Way

So when Ken began to work on concepts for this family-inspired ornament, starting with Santa made perfect sense. He then filled the rest of the “canvas” with vignettes of his wife, two children, their dog and even himself as a child.

“I remember carolers outside the door and my wife, Linda, handing out cookies,” Ken says. “There are so many memories of decorating the tree with my kids. And going to the toy store with my mom when I was a kid.”

Those memories are represented in the various scenes, which rotate as the horse and sleigh move up and down along the wintry base. As with Mickey’s Magical Railroad, Ken worked with Ron to figure out how to make the motion look surprising. “He always encourages me to try things that at first seem hard to imagine,” Ken says of Ron. “He made my dreams come out of my head!”

To light the rotating scenes, they embedded small spotlights in the street lamps. “We wanted to illuminate the front like you’re sitting in a theater,” Ken says. Ken also knew he wanted to get as much use out of the “Jingle Bells” theme as they could. So they added the lyrics to the classic song along the base.

Calling the Magic ornaments that feature light, music and/or sound “brain busters,” Ken has been working on them since 1985. “And if I could choose one ornament to represent all the coolest things I’ve done, this would be it.”

When Ken Crow’s manager asked him to make a full-size, electric Lionel toy train, Ken thought it might be…well, Christmas morning. Ken told his manager: “You know what? There really is a Santa Claus.”

To Ken, the project immediately felt like the culmination of all of his talents, interests, and experiences in his 30-plus years working on Hallmark Keepsake Ornaments.

“Whenever I retire, this will be one of the top five things I’ve ever done here at Hallmark,” Ken said. “What am I doing in my life that’s going to last 3 generations? Hopefully, this is the thing that Grandma and Grandpa will pass down through the generations.”

An artist by nature and by trade, Ken has also long nurtured a fascination with mechanical things. When he was little, he broke open his brother’s Mickey Mouse watch with a vise just to see how it worked. He also has fond memories of a live-steamer train that his dad’s friend built in his backyard.

Ken has worked on Keepsake Ornament Lionel trains before—but never a functioning O-gauge version. “I was born to do this,” Ken said.

When he started working on the project, he spent time in train stores talking to customers. Among other things, they told him it should be substantial and be able to pull several train cars. The finished product, inspired by the Toymaker Santa series, features a metal die-cast engine with a bell, a horn, the classic steam-locomotive “chuff” sound and a stack that puffs out perfect little donut-shaped rings of smoke.

“It’s the most traditional Christmas train set I could bring out of my mind,” Ken said.

For a project of this scope, Ken appreciated working with a team. His engineering partners pushed him to make it better and his Editor, Mike Brush, found just the right words to place along the sides of the cars as well as the phrases Santa speaks. Ken said Mike also suggested Ken’s name should be on the back of the engine.

What if Santa picked his favorite toys and then wrote his signature on each one of them, telling the world that these toys have his official seal of approval? That’s the idea behind the Santa Certified series ornaments.

Or, in Ken’s words, “They should look like the toys Santa would put on the shelf at his workshop and say, ‘Yes, these are the coolest toys we make.’”

Ken has worked on all three of the ornaments in the series. The first two featured a toy train engine and a jack-in-the-box. Ken said the challenge with this rocking horse ornament was to figure out something that hadn’t been done before. “I didn’t want to just make another horse,” Ken said.

“As a child, I loved taking toys apart to see how they worked. Keepsake Ornaments keep me connected with that inquisitive kid inside.”

Delivering all the toys on time takes Santa’s full attention—or did, until he thought of this incredible invention. Now every year on Christmas Eve when Santa’s sleigh takes flight, his Magic Cuckoo Clock makes time stand still throughout the night!

You can tell Ken Crow really put his heart into crafting this Keepsake Ornament. His face lights up each time the ornament’s music begins to play on the cuckoo clock.

“I always try to make the most wonderful thing that you can put in your hand that entertains you. My grandpa had a German cuckoo clock that was chocolate brown like this and chimed on the hour. He was a very serious man, but he wound it up every morning. For him to do that was wonderful to me. The music makes it famous—it gives it a real ‘wowie zowie!'”

This Keepsake Ornament plays “Up on the Housetop” and has lighting effects that interact with other ornaments on the magic cord. At rest, the lights gently change color in the tiny tree, and you can hear a playful “tick tock” as Santa keeps an eye on his list. It is yet another magical, mechanical addition to Ken’s impressive collection of fantastic creations—which will evoke a sense of wonder and awe in believers, young and old.

Who wouldn’t love to be an adult and a child at the same time?  Keepsake Artist Ken Crow has one of those special jobs where he can be both.

“I think about things as child would to come up with my ideas for ornaments,” Crow said.  “I especially love amusement parks because they’re filled with animation.”

Crow always wanted to be an animator and likes making two-dimensional objects come to life.  This extends to his work, where many of his favorite ornaments combine light and motion.

For example, his “Tiny Tinker” ornament depicts an elfin character working by lamplight.  The figure’s arm moves up and down and the lamp lights up.

But Crow’s early artistic interests originally led him in a different direction than Keepsake Ornaments.  He was an editorial cartoonist for the Vandalia Leader, a small Missouri newspaper.  He then became a staff artist for the daily college newspaper at the University of Missouri-Columbia.

Crow joined Hallmark back in 1979.  He worked as an artist in several areas before coming to Keepsakes.  HIs current designs are seen on such 1989 ornaments as: “Visit from Santa,” the first personalized Keepsake ornament; “Let’s Play”; “Hark!  It’s Herald”, the first in a series; “Cool Swing”; “Christmas Caboose”; “Hang In There”; and “Going South.”

In addition to his professional interests, Crow collects wooden toys and loves to do caricatures.  He still retains his fondest for animation, even away from the studio.

“One of my loves is making puppets,” Crow explained.  “This year, I’ve created a ‘Hippo in a Helicopter’ puppet for a church production.  It’s large enough that I can stand in it and operate the puppets that are the passengers in the helicopter.  A small motor even turns the helicopter blades.”

It’s that kind of magic – bringing an idea to life – that can be seen in Crow’s ornaments each Christmas.

I grew up in Long Beach, California, but I spent summers on my grandparents’ farm in Fulton, Missouri. I graduated from the University of Missouri in Columbia where I studied art and journalism.

Animation of all kinds. I especially am fascinated with mechanical 3-D animation.

The best I received was: Follow your dream. You are able to do greater things than what you think.

Happy Place (when I'm being creative)

I work best in my own little world. I prefer to be alone sitting next to a sunlit window with 1960s music playing in the background.

Favorite Work of Art (so far)

I have feelings about them all. My favorite is the one that makes the most people happy. I create things to make people’s lives better. I am fortunate that I like the things that I work on also.

The most fun that I have had with my family is going on vacations—riding trains all over the United States and in England and France.