Even before Ruth started to school, she loved to make 3-D objects. Her mother gave her a cabinet, which she promptly turned into a dollhouse complete with handmade furniture and decorative accessories. While she was in high school, she made murals for her school that are still on display.

After college, she taught art in elementary schools and, eventually, freelanced for Heartline (a plush division of Hallmark). She joined Hallmark full time in 1987 and has spent most of her time designing sewn product. Although she only recently became an “official” member of the Keepsake Studio, she has always worked on ornaments while in other departments, designing many Keepsake Kids Products.

At home, Ruth has designed several original Halloween costumes for her sons (a toothpaste tube, crayons, a fried egg, a stick of gum, etc.), and now many of those special costumes are getting a second life with her grandchildren. In her spare time, she enjoys opera, designing jewelry, felting and spoiling her grandsons and “granddogs.”

1 of the Extra Exclusives you can buy with a 2015 Keepsake Ornament Club membership.

Although this one’s made from styrene instead of dough, it still took Ruth on a trip down memory lane. “Just seeing that little cupcake as a miniature—it made me so happy,” she said.

This 2015 KOC exclusive ornament has an added bonus, it is a mini replica of the Christmas Cupcake series ornament to be released in 2016! In the final version of the full-size series piece, the peppermint you see on top will actually be made from two pieces of fabric rolled together and sliced. And what looks more like frosting on this ornament will become individual pieces of “coconut” on the series ornament.

How do you get fabric to look like frosting? Well, this year’s Christmas Cupcake series ornament features a layering technique called “ruching.”

Ruth described it this way: “You run the stitching this way and that way, diagonally, and then there’s a running, gathering stitch straight down through the diagonal lines. And when you pull all of that, it takes it all up, and the fabric ruches.” The technique sounds fairly complex, but that’s just another day in the office for Ruth, who has tremendous skill as a seamstress to go along with her many other design talents.

Like every cupcake in the series, the base or “wrapper” is made of styrene and then painted to coordinate. Then as a finishing touch she added tiny plastic hearts and chunky glitter as the “sprinkles.”

One of the things that Ruth loves best about her job is that she gets to work with so many different kinds of materials. And there’s no better proof of that than this elegant cross.

A combination of glass and metal, the cross was inspired by Ruth’s fondness for camphor glass, a material used in a lot of vintage necklaces, pins and other antique jewelry. Ruth actually collects camphor jewelry, so she had plenty of research material to get her started on the project.

She used a vintage camphor piece for inspiration and crafted digital drawings from various angles for the engineers and the manufacturer. The front of the glass is smooth and the back has cut lines that feel like ridges. The edging of the cross is metal. The middle piece is a crystal, and the corners feature metal filigree.

Another material that Ruth is quite fond of: porcelain. So that was an easy choice for the nautilus shell. “Porcelain is just a beautiful medium,” she said. “It’s very elegant.” 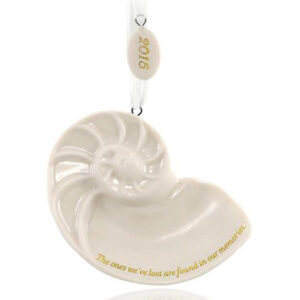 The nautilus is a natural symbol of the infinite, which obviously ties in seamlessly with the intention of the ornament. In small gold lettering, it says: “The ones we’ve lost are found in our memories.”

The ocean theme of the piece also made her think of growing up in Fair Lawn, New Jersey, and spending summer days on the Jersey Shore, which she visited again just last summer.

“I’ve always had an attraction to the ocean,” Ruth said. “I just love the sea and all the things that come from it.”

She created the mockup from paper clay after researching shells as part of her personal craft projects. “I like to take vintage bottles and solder sea shells onto them,” Ruth said. “Just another tribute to the sea.”

“This is a sound ornament, and he has lots of fun and funny facts. But I didn’t get to hear his voice before I sculpted him. I chose to make him look a little nerdy with his broken glasses and pocket protector with candy-cane pens, and he’s standing on his book of Christmas facts and trivia. When I played the ornament for myself, I was surprised at how many sound clips we were able to load onto the ornament. I really like what our teams are doing for our family-fun Keepsake Ornaments. I’m already contributing ideas for ornaments in 2014.”

“This one is made of porcelain and I added a crystal in the center and rhinestones on each point of the snowflake. It has a pretty combination of glazed and unglazed areas, and I was surprised to see how it turned out. I think porcelain is such an elegant material, and in combination with the rhinestones and crystal, it looks wonderful. Our dated snowflakes have become an unofficial series of sorts. (Keepsake Artist) Joanne Eschrich did the first one in 2010 and I did the next two. I think a snowflake is a classic icon of winter that belongs on the tree. Because it’s dated, it can commemorate any event of the year.”

“I really enjoy working in fabrics and textiles, so this was a fun one. I worked out the pattern of hearts on the fabric and the rickrack. I also was given the phrase “Memories Made with Love” for the design, and I placed it on a potholder attached to the apron. I tucked in a spatula and wooden spoon because I think they particularly represent a mother and daughter in the kitchen as far as memories of childhood. One of my earliest memories with Mom in the kitchen was getting to taste the batter for cookies or cake even though that was something we weren’t supposed to do. It was yummy. And now, my son is a chef with experience at a number of restaurants in Kansas and Missouri.”

I was born in Paterson, NJ, and grew up in Fair Lawn. I studied at William Paterson University in Wayne, New Jersey. I majored in art and minored in art education.

Nature…particularly the ocean. Also, shopping at antique malls, visiting museums and going to the opera.

I remember hearing or reading somewhere that “time becomes meaningless in the face of creativity.”

Happy Place (when I'm being creative)

Favorite Work of Art (so far)

Although I was not an official Keepsake Artist at the time, I was a Hallmark artist when I created Threadbear. This was an ornament that I made during a bear-making workshop with Jeff Wilson.

When I'm Not Working

I like to spend time with my two wonderful sons and their families. My oldest is in the home remodeling business and is wonderful when it comes to projects around my home. My youngest is a fabulous chef and makes the best crab cakes in town! And I have two grandsons who are growing up way too fast.

For fun I have season tickets to the opera…and I love to find new restaurants to try and taking long walks. But my favorite thing is to be near the ocean.