Nina Aubé is the closest you’ll find to a cuteness mathematician! She’s always trying to formulate what will get her the maximum “awwww” factor. “As I’m sculpting, I’ll act out characters’ expressions and movements so I can get it just right. My focus is always on adding the perfect amount of emotion that will make people smile.”

For Keepsake Artist Robert Hurlburt, Hallmark began as a family affair—his brother helped bring him into company. “He and I knew that we wanted to do something creative rather than what our family traditionally did, which was working in an industrial trade,” he says. What Robert brought with him from that background is the technical eye he uses to scrutinize each of his creations.

20th in the series.
Member Exclusive 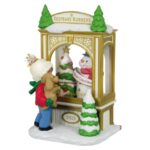